There are three main workflows when using Avid and Nucoda

Nucoda supports the reading and writing of OP-Atom MXF media.

DNxHR will only be available in resolutions larger than HD

Please note that media format availability will depend on the frame rate and resolution.
Not all frame rates support all resolutions.

Markers imported as Segment or Timeline

Nucoda and Phoenix now correctly assigns Segment and Timeline markers when imported from AAF,  based on the marker type in the Avid timeline.

For EDL the Avid convention is followed:

If an AAF is imported into the application any speed or variable speed changes that were applied in Avid will be marked on the clip as segment bookmarks. The bookmarks will contain the value of the keyframe at that point.

This will allow the user to easily duplicate speed ramps when using tools like Re:Vision FX Twixtor.

Users can choose which audio track should be imported when importing an AAF, by default the setting is to import all tracks. 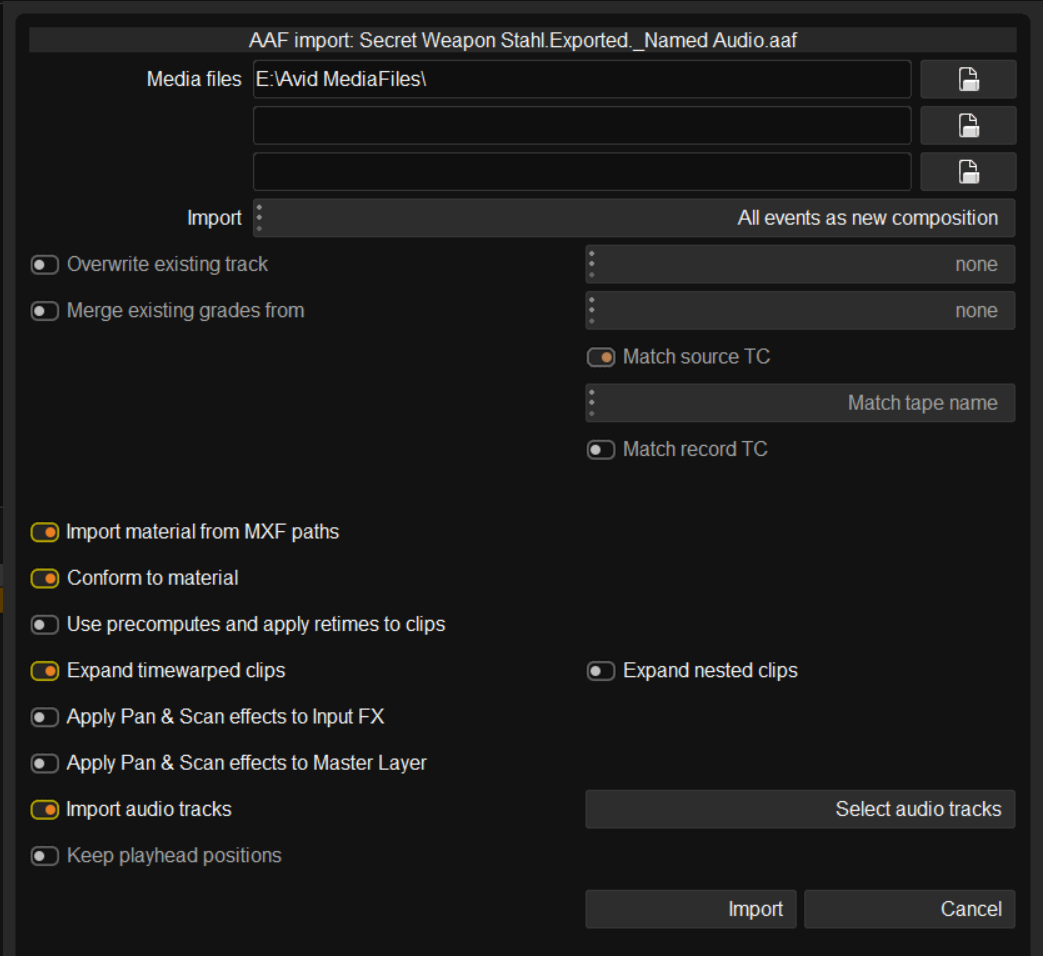 Clicking on the Select Audio Tracks button will open a dialog that will  show available tracks to select for import. Once opened, a track selection must be made else no tracks will be imported at all 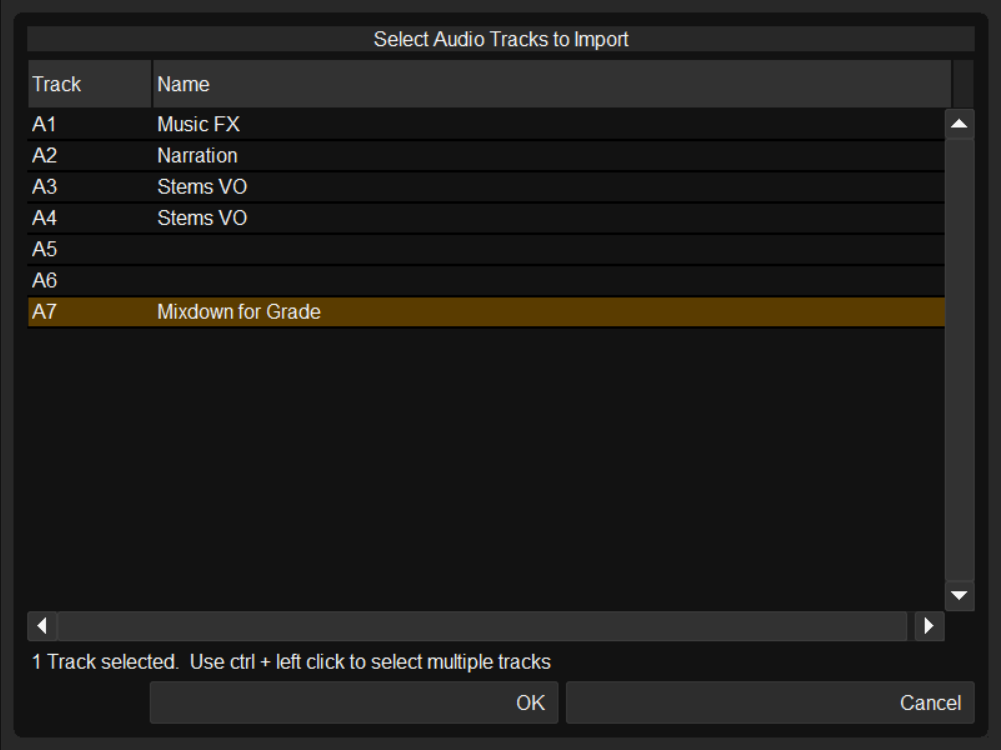 Track names are retained but the will be reordered numerically in Nucoda.
Using this option will not affect AAF round trip workflows.

Nucoda is able to import material directly from an attached Nexis storage system (Avid license is required) Exports can also be made to the Nexis using automatic backup and staging options.

If the Nucoda is attached to an Avid Nexis (ISIS) with Interplay the user can check clips and sequences into Interplay directly while exporting from Nucoda.

When exporting OpAtom MXF files in any Source order format, the names are automatically generated on export and no user input is accepted.

In  Mixdown Rec the user can name the file as required.

Nucoda reads the LabRoll, CamRoll and Reel fields when importing and exporting media from Avid, this metadata will be passed through from Avid to Nucoda and back to aid a relink workflow.

Importing an AAF is done via the import menu in the library: 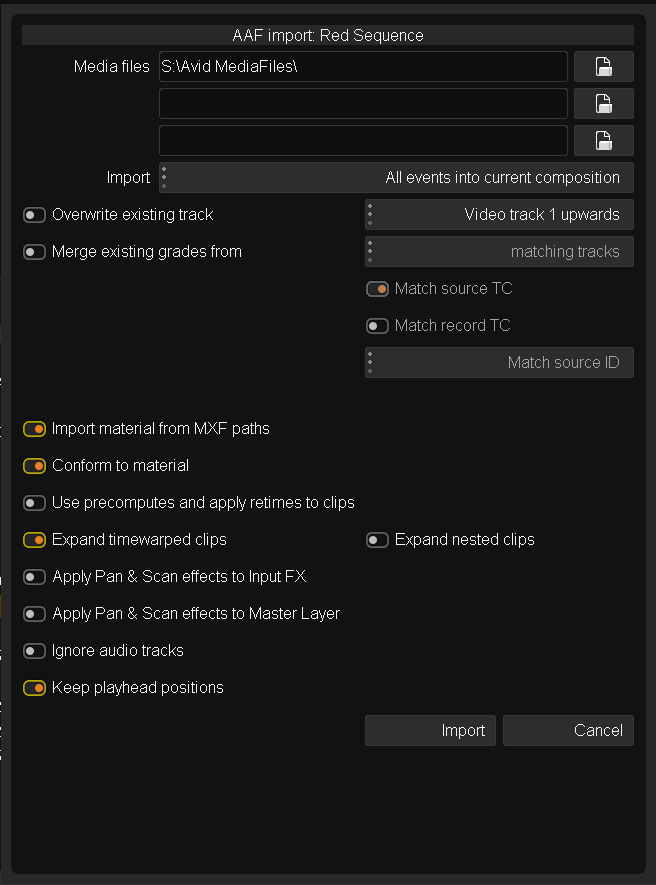 1. Media Files : Set the path to the files needed for import

2. Import: Set to select whether the AAF is imported into a new composition or merged with the current. Please note, that for a round trip only the original imported AAF is used.

4. Merge grades - select this to merge grades from a previous composition into a new one.

5. Select to import the material referenced in the AAF file

6. Select to link the material to the imported composition

8.  Expand timewarped clips and expand nested tracks - this option will replace any Avid retimes with filler on the timeline to represent the actual length of the timewarped clip, and will place the full source media on a separate track, with the start points of the clips at the same timecode. This allows for the grading of the source material which can be returned to the Avid. Nested effects are not supported, clicking the option will

however split rendered Avid titles into Matte and Fill and place them on the timeline.

9, 10 Apply Pan & Scan to Master or Input FX layer - Please note that once applied, these effect will be rendered as part of the output file - in a round-trip scenario the effects will have to be removed from the sequence in Avid to avoid them from being resized a second time in the Avid.

AAF export dialog options: Export as part of a AAF Roundtrip workflow (only available if an AAF was imported to create the composition) 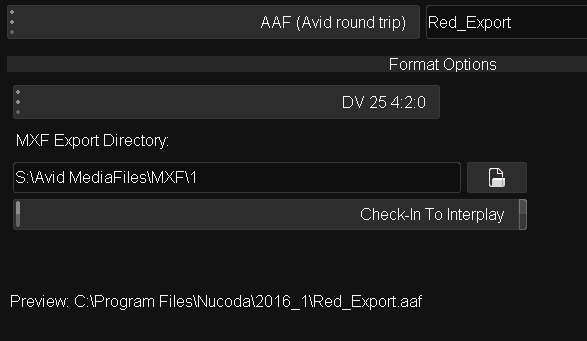 Export MXF source files from Nucoda to Avid for relinking

In this release we have made improvements to the Relink workflow when using  MXF OpAtom files, we have reinstated a feature that was removed in 2016.1 that precluded users  from relinking by Source ID,
it required a Tape Name or Tape Name data duplicate into the LabRoll,Camroll or Soundroll fields to relink against.

We have made a change that will now correctly use the Source ID from the original Avid MXF to ensure relinking is successful. Please ensure that the new exported material is exported to a new folder or volume to allow for easy relinking.

P
Patrick is the author of this solution article.

Did you find it helpful? Yes No

Send feedback
Sorry we couldn't be helpful. Help us improve this article with your feedback.